The following press release and review can be published without asking for permission.  Please let me know where it is published so that I can help tweet and like the article.

Pensacola FL—Author Paula Hrbacek is pleased to announce the release of her new Christian romance novel, “On Higher Ground”.  Set in Pensacola FL, the novel highlights several local landmarks such as the clamshell at Quietwater Beach, Rosie O’Grady’s Bar and Grill and Casino Beach.

“People from Pensacola will have to take the locations with a grain of salt,” cautions the author.  “It takes a long time to put a novel together. The city was going through a lot of changes while I was working on it.  First, I had the main
character working at University Mall, and then they tore that down.  Then I had her living near the sewer plant, and they turned that into a baseball field. For their first date I chose Hunan’s, and that restaurant went out of business.  After a while, I thought, well, at least I’m safe with the Blue Angels show.  No one in their right mind is going to mess with that.”

“On Higher Ground” is a sweet romance about finding the courage to change.

Melanie Worlds has run out of luck; no job, no friends, no future.  Desperately wanting to replace the middleclass life she once knew up on “the Hill”, her faith is being tested to the limits.  JT, her newest friend, is up to something, but Melanie isn’t sure what it is.  And then Brad, her high school crush, comes back to town.  She can’t let him know how bad it is, or he’ll lose all respect for her. And, to make matters worse, someone is trying to break into her apartment.

None of her prayers are getting answered, and she feels all alone.  But she’s not.  Two guardian angels have been assigned to help these three humans.  The angels know God’s plan, and it’s going to take everything they’ve got to pull it off.
To battle temptation, the angels will need to instill courage; courage to dare, courage to dream, and most of all, courage to love one another.

People who have read the manuscript have this to say.

“A stunning story of angels, wonder and redemption. Prepare to be amazed.”  Duffy Brown, author of  “Iced Chiffon” and “Killer in Crinolines”

“This is a novel with a lot of heart and soul.  But it's also a very grounded one, thanks to the vivid, sometimes gritty
details that Paula Hrbacek weaves into the narrative.  So many spiritual novels aren't, and the characters end up being
mouthpieces for the author's beliefs. That doesn’t happen with “On Higher Ground”. Hrbacek gets her message across without ever losing sight of the story itself or making her characters into cardboard cut-outs. The main characters --
Melanie, J. T., and Brad -- are fully fleshed out.  We see them -- faulty lines, good intentions, and all -- and we care
about what happens to them.”          -- T. J. Banks, author of “Sketch People:  Stories Along the Way”.

Paula Hrbacek is the author of “Stars Shine After Dark” and four non-fiction craft books.  She won first place in an international writing contest sponsored by Echoes of The Right to God in 2011.  She majored in journalism at the University of Missouri-Columbia, and writes two newspaper columns for The Examiner, an online newspaper. She and her husband live in Pensacola and are members of the Cathedral of the Sacred Heart.

“On Higher Ground” is available in paperback, Kindle and Nook from Amazon and B&N. 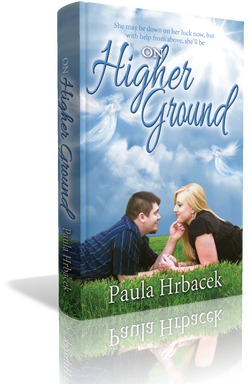